Blaze turned eleven years old on February 14, 2007 and aged like a fine wine. Blaze was a stellar example of Draft dog type,
had a great temperament and like his sire, proved himself as an outstanding stud dog by "stamping" his puppies while also improving on himself.
Blaze has produced 29 AKC Champions thus making him one of the top producing sires by percentage in the GSMD breed.

In 2007 at 11-1/2 years old, Blaze won the GSMDCA National Specialty Veteran Sweepstakes for the third time,
thus retiring the Veteran Sweeps Challenge trophy. This was an outstanding accomplishment for a dog who was the oldest in a ring
full of very strong competitors. Noone who saw Blaze at the 2007 National could believe he was 11 years old.
His topline was still strong and he was still sound enough to gait around the ring with dogs five years his junior.

Blaze lived a long, healthy and happy life with Kathy Spencer and her family who loved him dearly.
Blaze's legacy lives on through his descendants and he will be missed by everyone who knew and loved him.
As the owner of his sire, I will always be immensely proud of the contribution Blaze made to the GSMD breed.

Blaze (BINSS CH Rise and Shine's Blazing Riot, ROM) produced thirty-two AKC Champions thus making him one
of the top producers in the GSMD breed. He was bred SELECTIVELY and only sired ten litters in his 11-1/2 years.
To date his frozen semen has produced only one litter of three puppies, all of which are now AKC Champions.
Over forty-eight percent of his offspring are AKC Champions of record. 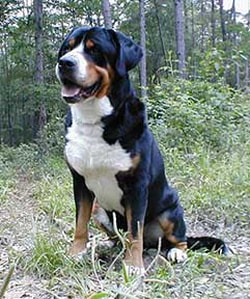