"Abbers", known by his clos﻿est friends as "Abberdoo" , Abberdoodles"  or just plain "Mr Doodles" was an absolute love and had quite a following.
Everyone who met him, fell in love with his gentle nature. When someone first entered the house, Abbers would utter a very loud "Baroo" but within
minutes, he would either be leaning on the visitor or sitting on their foot . I remember the first time I saw Abbers and his littermates when I went to Ky for
the 8 week evaluation. I fell in love with him immediately. He was a perfect miniature of his dad, my beloved "Rio",  who I had lost just a year earlier.
His breeder kept telling me that although he was very handsome, Abbers just didn't have the  "attitude" that would make him a great show dog.
Turns out she was right but I never regretted my choice.
Abbers never had  show dog "attitude" and for that I am grateful.
He had no problem finishing his Championship but when I tried showing him in the  Best of Breed ring, he chose to lean on me, wag his tail,
and look up at me with his ears pinned back submissively. while in the meantime his competition showed their "attitude" and won the judges eye.
I'd take Abbers and his easy going ways any day over a dog with an "attitude" that is difficult to live with !
Abbers was a gorgeous boy with beautiful breed type and the sweetest temperament imaginable. When Abbers was a young dog I was approached by
a number of breeders wishing to breed to him because of those traits. However, I knew his pedigree was risky for epilepsy.
So, I had his semen collected and frozen and chose to wait until he was older to decide if I were ever to breed him.
It proved to be one of the best decisions I have ever made.
Abbers developed idiopathic epilepsy  at 6-1/2 years old . He was in the hospital for almost a week.
I never thought I would see my beloved Abbers leave the hospital never mind watch him reach old age.
We were very fortunate that Abbers responded well to medication and was seizure free for almost 5 years at the time of his passing.
Abbers was  an absolute joy. Each time I looked at his sweet expression and soft eyes, I was reminded of his dad who I also adored.
Abbers' favorite activities were leaning on people, sitting on the nearest foot, going on hikes with our friends, and wallowing in Rock Creek.

Abbers lived to be almost 12 years old -- a huge milestone for any Swissy but especially for a Swissy with epilepsy.
Abbers finished his AKC Championship at 3 yrs old and earned both legs of his Herding Instinct Test at the 2005 National Specialty Herding Tests.

At 6-1/2 yrs - Finally standing after spending a week in hospital
﻿Abbers developed epilepsy at 6-1/2 years. He was visiting my close friends, the Klamans, who live nearby. They had gone out for a short while to do some errands and came home to find Abbers seizing in their living room. I will never forget that phone call. I got to their house in a matter of minutes and found Kimberly, Dan and Abbers on their front lawn. Abbers could barely stand and he kept falling over and seizing. We managed to get him into the car and to the emergency hospital which fortunately was nearby. To make matters worse, Abbers had an adverse reaction to the Valium which was administered to him upon admission. He was given a number of treatments none of which seemed to be effective. It was a very scary ordeal that lasted almost a week. As a last resort, he was put into a propofol - induced coma in order to  stop the clusters. He came home after 6 days in the hospital, very wobbly and disoriented.
He adjusted well to the initial cocktail of phenobarbitol and Zonisamide but  had a couple of mild breakthrough seizures the following year. After adding Keppra (leviteracetam) to the mix, his seizures were brought under control.
At eleven years old, Abbers has been seizure free for almost 4 years .To look at him you wouldn't know anything was wrong with him. He has slowed down a bit with age but I am grateful for every day I have with him especially when I think back to four years  ago and remember how scared I was that he would never leave the hospital.

Several years before the epilepsy nightmare began, when Abbers was around 3 years old,  breeders began to approach me interested in breeding to Abbers.  He was a gorgeous boy with a stellar temperament. So, naturally many were interested in him.  However, I knew his pedigree was risky for epilepsy so I turned down the breedings and chose instead to have his semen collected and frozen and to wait until he was older if he were ever to be bred.  Choosing  not to breed him when he was young was one of the best decisions I ever made. Abbers developed idiopathic epilepsy at 6 years old. He was in the hospital for almost a week. I never thought I would see my beloved Abbers  at home again never mind see him reach old age. He is now  eleven years  old and doing extremely well. I will never regret the decision to turn down all those breedings .
If he had been bred, any number of those puppies would likely have inherited the disease and more owners would be experiencing the heartache  that comes with living with epilepsy. Having experienced first hand the helpless feeling of watching my Swissy having uncontrollable cluster seizures, I wouldn't wish it on anyone and will continue to do my best to reduce the risk in my breedings and to share information about epilepsy  with owners and fellow breeders.
Although there are cases like Abbers who develop late onset epilepsy at older than 4 years, the disease more typically  shows up between the age of 1 and 3 years. Waiting to breed  males until they are at least 3 years old (preferably older) is, in my opinion, the most responsible choice since it means reducing the risk of possibly breeding an affected dog.
It is a pity that most breeders will not say "No" to a stud fee. As a result many GSMD males are being bred too young as well as too often. Overbreeding a dog not only reduces his value to the gene pool but can have serious repercussions if progeny start to develop serious health problems. Once this happens, nothing can be done about the subsequent litters which are akin to ticking time bombs.  Thus, careful and SELECTIVE breeding of stud dogs is the best way to protect the breed.
The option to collect, freeze and WAIT is a  choice that stud dog owners should choose more often if they really care about the health of the breed.
﻿ 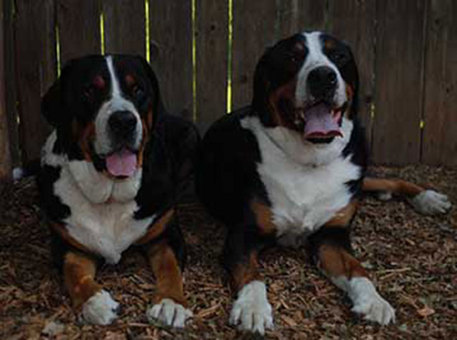 Abbers (R) with his pal, Cho